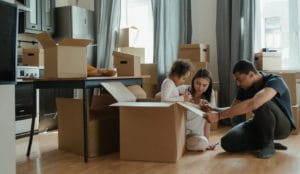 After a bumpy 2020, 2021 is already rewriting the record books. From property prices to interest rates, to refinancing – no matter which way you look records are being broken.

Today we’ll look at why property market sentiment is riding so high. How quickly things can turn around. It wasn’t too long ago (9-10 months, to be more precise) that many highly-regarded economists were predicting property prices could plummet 30% due to COVID-19.

Instead, now we’re seeing official RBA documents predict that house prices could increase 30% over the next three years, so long as the official cash rate remains near record low levels (at or below 0.5%). Suffice to say, market sentiment is soaring. So let’s take a look at some of the records currently being broken.

Australian housing values have just reached a new record high as prices continue to rise across the country, according to CoreLogic. In fact, housing values have surpassed pre-COVID levels by 1.0%, and the index is 0.7% higher than the previous September 2017 peak. Every capital city and rest-of-state region recorded a rise in housing values in January, ranging from a 2.3% surge in Darwin to a relatively mild 0.4% rise in Sydney and Melbourne.

Unsurprisingly, regional housing values are rising at more than twice the pace of capital city markets due to COVID-19. “Better housing affordability, an opportunity for a lifestyle upgrade and lower density housing options are factors that might be contributing to this trend, along with the newfound popularity of remote working arrangements,” says CoreLogic’s research director, Tim Lawless.

In case you missed it, the RBA cut the official cash rate three times in 2020, with the last reduction in November taking the rate to just 0.1%. At the same time, competition amongst lenders is fierce, with many offering record-low home loan rates in a bid to win over as many customers as possible.

With record-low interest rates, it makes sense that we’re also seeing a record number of mortgage holders refinance their home loans to save themselves thousands of dollars. According to ABS data, last year, the total number of home loan customers who switched providers increased by 27% – from 143,664 in 2019 to 182,016 in 2020. And experts are predicting the number of externally refinanced loans will grow by 9% this year, according to a recent Finder survey, meaning nearly 200,000 Aussies will switch to another lender in 2021.

Private house approvals rose for the sixth consecutive month in December and reached a record high, according to Australian Bureau of Statistics (ABS) data. In fact, private house building approvals surged 55.6% over the year. “Federal and state housing stimulus measures (such as HomeBuilder), along with record low-interest rates have contributed to strong demand for detached dwellings,” says Daniel Rossi, Director of Construction Statistics at the ABS.

With all of the above in mind, it’s no wonder that buyer confidence is surging. In fact, positive sentiment among those in the property market has reached a record high, and negative sentiment is at an all-time low, according to ME Bank’s latest Quarterly Property Sentiment Report. The buoyed sentiment is being supported by expectations for residential property price increases, higher levels of market activity and a combination of record-low interest rates and government stimulus incentives says ME Bank.